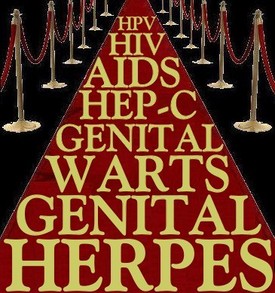 STD Carriers Disease Control and Prevention Services kicked off Sexually Transmitted Disease (STD) Awareness Month by identifying 100 Celebrities with STDs as part of an online study. The Centers for Disease Control and Prevention (CDC) recognizes April as STD Awareness Month for calling attention to the impact of STDs while promoting STD testing across America. The Study on Celebrities with STDs aims to support that effort by showing everyday people that fame and fortune are not prophylactics.

The Study on Celebrities with STDs focused primarily on incurable STDs with particular attention given to the human immunodeficiency virus (HIV), acquired immunodeficiency syndrome (AIDS), hepatitis C, herpes simplex virus 2 (HSV2), human papillomavirus (HPV), and genital warts in men. Out of the 100 celebrities profiled in the study 44 HIV/AIDS patients were identified with hepatitis C coming in a close second at 42 and HSV2 wrapping up the top three at a distant third with just 10 victims. HPV only accounted for 3cases covered in the study all of which were cervical cancer survivors and the genital warts category only has 1 lonesome reality star so far.

Although technically a STD hepatitis c was largely to blame for the majority of musicians with 19 cases most of which were attributed to intravenous drug use and several of those involved baby boomers infected in the 1960s or 1970. The baby boomer hepatitis trend inspired STD Carriers to launch Faces of Hepatitis, a STD education program based on the Multnomah County Sheriff’s Faces of Meth drug education program. Faces of Hepatitis compares before and after photos of Keith Richards, Anita Pallenberg, Marianne Faithful, and others side by side to document damage inflicted on the human body by hepatitis c over time.

Study on Celebrities with STDs