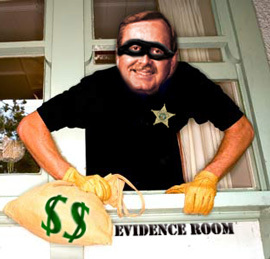 On April 27th, 2011, after receiving an anonymous tip about abuse of Palm Beach County Sheriff’s Office purchasing cards, PBSOTalk.com did a Public Records request asking for the purchasing card records for the Colonel of Legal Affairs for the agency. We received these records on May 7th and found out about several purchases that raised several flags and blatantly violate Palm Beach County Sheriff’s Office policy regarding purchasing cards to include the purchase of an Apple iPad.

Shortly after we received the documents requested, PBSOTalk received another anonymous tip from a different source; this was someone within Sheriff Ric Bradshaw’s administration and they had explicit knowledge of details not available to the public.

This tip stated the following (slightly paraphrasing to keep the integrity of the tip while preserving the identity of the tipster):

“Your public records request of a Colonel at PBSO has stirred up a hornet’s nest… more importantly, Ric Bradshaw.

The Sheriff has a P-Card too. He has had three issued, but because of a certain Public Records request that came in, he rushed to get a new one right away. Why? So that if a Public Records Request came in asking for the history of his P-Card, there would be no history on the new card attached.

Of course, a Public Records Request would ask for ALL P-cards issued to him with history and any Fraud Reports. Now, that is important. To be issued a new one, there must be a fraud that occurred. Well, he still wants a new card so he might be in a position to commit fraud by falsifying the fraud report he must swear to and sign.

He might put himself in a position to commit fraud by falsifying the fraud report he must sign stating a fraud has occurred on the card. Well, no fraud did occur on the card he has. That would all show up in these reports. The bank will not issue a new P-Card without a fraud report. The history on the card will reveal a lot, some maybe not so legal.

Give it a week or so, make sure he gets a new card and he signs that fraud report. That’s a crime!”

The tipster had explicit knowledge the Sheriff was going to commit fraud to receive a new purchasing card with a new account number. By committing this crime, any requests that came in to Central Records to obtain Sheriff Bradshaw’s purchasing card records would result in response stating there were no transactions associated with his account. Because of this tip, we were able to restructure the wording of the public records request to include ALL records for ANY purchasing cards he had in the last several years. Per the tip, we also requested any Fraud reports Sheriff Bradshaw signed to obtain that new card.

The records received by PBSOTalk had two reports of fraud. The first reported fraud occurred in March 2011 and came with extensive ancillary documentation detailing the nature of the fraud. This documentation included disputed charges, facsimiles to the bank, e-mails concerning the fraudulent charges, etcetera. In other words, it was a legitimate request to obtain a new purchasing card because the account had been subject to theft.

The second fraud report came just days after Palm Beach County Sheriff’s Office received the public records for the PBSO Colonel. This fraud report is an official document signed by the elected Sheriff dated May 12th, 2011. The Fraud Report and request for a new Purchasing Card showed no other documentation in reference to any fraudulent charges. There were no disputed charges, no calls to the bank, and no e-mails there had ever been any fraudulent activity on the account. It was simply a fraud report so Sheriff Bradshaw could obtain a new card with a fresh account number. This fraud report confirmed that Sheriff Bradshaw, upon hearing we were requesting purchasing card records, rushed to obtain a new purchasing card that would have no prior purchases attached.

The benefit of having a fresh account number is so if a public-records request is submitted asking for Sheriff Bradshaw’s purchasing card records, the requester would receive a letter from the records department stating there were no transactions on the card issued to Sheriff Ric Bradshaw. One may ask why a Sheriff would falsify a document claiming his PBSO credit card was used in fraudulent activity; we certainly questioned it ourselves, until we began reviewing the charges.

Sheriff Ric Bradshaw spent thousands of dollars at restaurants, bars, hotels and other purchases that are strictly forbidden to be purchased with the PBSO Purchasing card and paid for by the Citizens of Palm Beach County.

Sheriff Ric Bradshaw falsified an official document, signing an affidavit which falsely claimed a crime occurred. He did this in a concerted effort to hide his Scheme to Defraud and Grand Theft of taxpayer dollars from public record and from Palm Beach County tax payers. Because the Sheriff of Palm Beach County committed these crimes, therein lies a problem.

Even though there is probable cause to arrest Sheriff Bradshaw, who arrests the chief law-enforcement officer in the county? We have submitted complaints to the Florida Attorney General’s office, the Florida State Ethics Commission and the Palm Beach County Commissioner’s office. Will any of these agencies investigate a member of their own for these crimes? We don’t know, but we’ll keep you posted at out site.

For more information and to see all the documentation on these crimes, please visit our site at www.pbsotalk.com. PBSO Talk is an independent web site dedicated to ending the Culture of Corruption in Palm Beach County as well as ending government waste. Other past stories include:

* Palm Beach County Sheriff Ric Bradshaw caught stealing a firearm out of evidence; stealing reports to cover up the crime.

* A recent poll at our news blog site (http://news.pbsotalk.com) found that out of 520 voters, only 21 of them would vote for Sheriff Bradshaw.